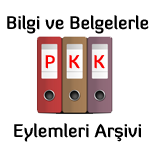 Hamzali Massacre was done and undertaken by Pkk on 01.01.1995. As a result of Pkk attack, 20 civilian villagers – most of them are children and women- were slaughtered wildly. … Devamını oku →

In Tekman Erzurum, Mustafa Bingol was murdered by PKK in front of his house (19 November 2014) because he has reported PKK to police as the terrorist group was forcing … Devamını oku →